In my last post I talked about the 5,2 meter satellite fairing for the Falcon 9. While writing my article I was wondering how the fairing was separated.

The classic way in space industry is using explosive bolts, also called pyrotechnic fastener. This is a bolt with a  explosive charge embed in it, that can be detonated electrically. When detonated, the bolt breaks, releasing the parts that are held together by it.

One of the big drawbacks of explosive bolts, you can’t test them beforehand! You have to trust the manufacturer that your explosive bolt is reliable. As a good separation is very critical, the perfect working of these bolts is paramount to a mission.

In an interview, I heard Elon Musk talking about his dislike using explosive bolts for first and second stage separation. For Falcon 9 stage separation, he uses a pneumatic system. I became curious about the fairing separation and decided to just ask him…. 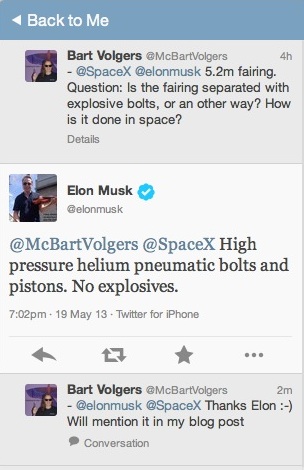 So no old fashioned exploding bolts, but high tech helium powered bolts and pistons, to separate and open the satellite fairing. These are systems you can design and test well.

Thanks for the reply Elon!