By Bart Volgers on 23 November 2012 in GrassHopper, SpaceX 0

Earlier SpaceX released two video’s showing successful Grasshopper tests. When watching these video’s you might think “Big deal”. What’s special about this? Well its’ special in different ways And in this and a a follow up post I’ll demonstrate what’s special special on the Grasshopper test.  By the way the official name is: Vertical Takeoff and Vertical Landing test vehicle (VTVL) but Grasshopper is much more cool so we stick with that name.

First thing I’ll address is the scale. If you watch the video’s Grasshopper doesn’t look like that big. If you would stand beside it, you could reach up and probably reach the letter “S” of the SpaceX sign on the side of the rocket. So no big deal, it’s a small scale test, right?

Wrong! The video is quite deceiving in that respect. You’ll notice this when you’ll take a picture with stuff beside the Grasshopper that gives you a reverence about scale. Steve Jurvetson did and even better SpaceX published a areal photo of Grasshopper. On these two you can compare Grasshopper with humans and some humanized sized object like a bus and a big SUV. Well the look like, Playmobil and Dinky toys! 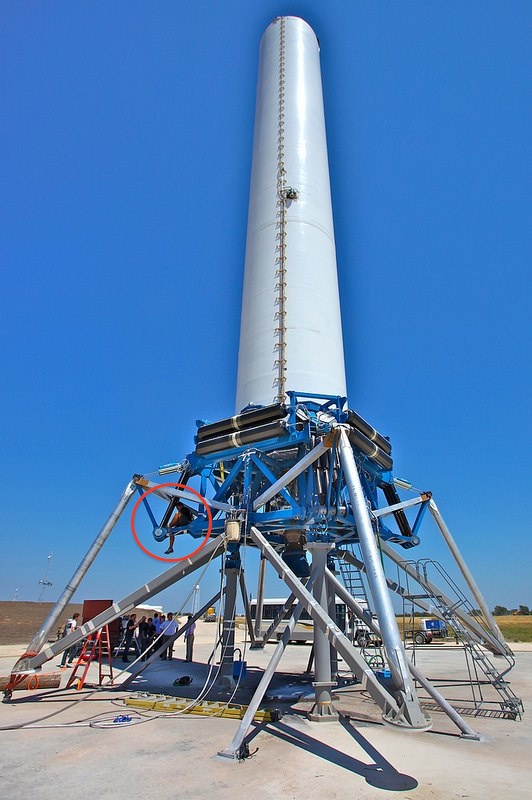 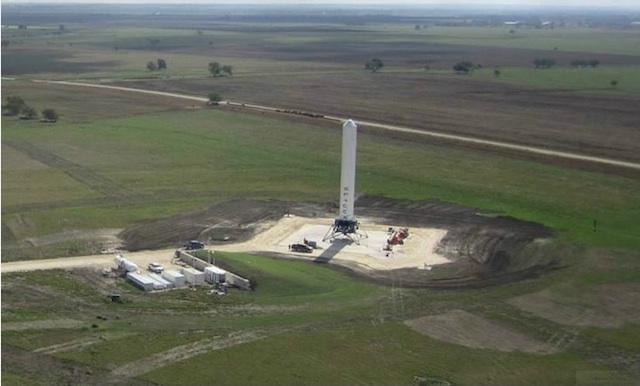 Yes Grasshopper is BIG! Its’s about a ten stories building, that’s roughly 30 meters or about 100 Feet!

Grasshopper is a full size Falcon 9 first stage with just one Merlin motor. The “small” hop it makes in the video, is about a two sorry hop, which is about six meters or about 18 Feet.

Imaging a 30 meter rocket lifting off 6 meters, balancing on just it’s main truster. The only thing stabilizing our giant Grasshopper is a very fast and precise steering mechanism that’s controlling the pivotable main engine. It’s like balancing a giant 30 meter long pencil on one finger tip and just having one meter of reach with your hand to keep it balanced. That is really something!

But why does Grasshopper look that deceiving small in the video

That’s a good question I asked myself. The answer is relatively simple.

When having no apparent comparison in the video footage itself, or mind uses indirect measures to get a idea of scale. Or mind assume that what is called a “eye line” this is a line of sight in which thing appear horizontal. In the video footage the “eye line” is at about the letter “A” of the SpaceX logo on Grasshopper. Or mind makes the assumption that that the letter “A” is actually on the hight of or eyes. That would be about 1,7 meter or between 5 and 6 Feet.

Now having photo’s that really contradict the eye line perspective, it’s a good idea to find out how the video was shoot. Having a good look at the areal photo I discovered a pole peaking high over the blast wall. 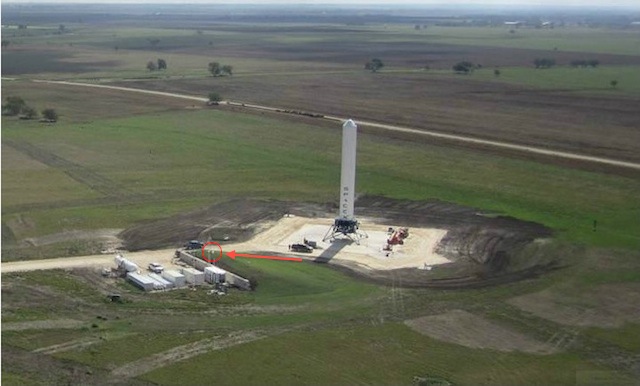 Comparing the horizontal angle with Grasshopper video footage it’s a match. The pole has a bit more than the double hight as the container next to it, which makes it about 9 meters. So the eye line in the video is about 9 meters and not what your mind presumes, 1,7 meter. This is about a factor 5 and this is the reason, your mind presumes that the giant Grasshopper, looks about five times smaller than it actual is. It really is a ten stories, 30 meter Grasshopper…

Quite a big step for a grasshopper