With CRS-5 launch SpaceX launched the sixth Dragon capsule to ISS. This launch was particularly exciting as this was the first launch SpaceX tried to land the first stage on the Autonomous Spaceport Drone Ship (ASDS).

Short after the successful deployment of Dragon to it’s initial orbit. Elon twittered:

“Rocket made it to drone spaceport ship, but landed hard. Close, but no cigar this time. Bodes well for the future tho.”

“Ship itself is fine. Some of the support equipment on the deck will need to be replaced…”

“Didn’t get good landing/impact video. Pitch dark and foggy. Will piece it together from telemetry and … actual pieces.” 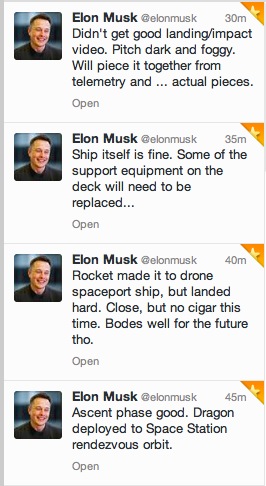 The launch video is especially beautiful. The launch starts when it is still dark and when Dragon deploys it’s solar array, it struck by the first sunlight of the day.